‘Laughter is the best medicine’

We’ve ll heard that one before, but it becomes hard to smile and laugh about a chronic illness, or a debilitating disease, and definitely not when death stares you in the face. The story I bring to you today is about a man and his organisation who have made it their mission to help children smile inspite of their sickness.

We are into the 6th month of the #WATWB, a noble initiative where we try to spread cheer, kindness and happiness in a dog eat dog world.

A month back, during a conversation with a fellow-blogger, Mr. Sushant Dhamecha, I was made aware of a certain clown in Bangalore, India, who has been assiduously dedicating himself to help sick children in various cities in India. The clown is Mr. Harish Bhuvan, who left his prestigious and lucrative job at IIT-B, following a childhood experience and a personal tragedy, and began his mission to spread smiles on the faces of the sick and ailing. 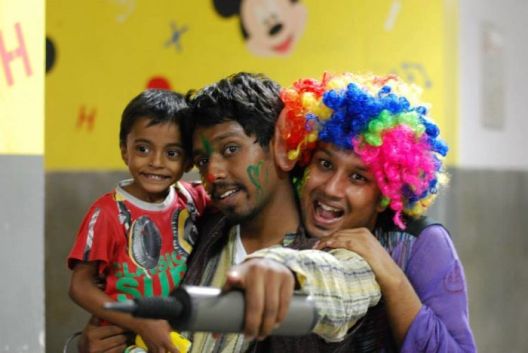 Harish and Nivendra with a happy child at a hospital. Photo Credits: Compassionate Clowns, FB Page

My fellow-blogger, Mr. Dhamecha had written a blogpost about this organisation’s noble endeavors, but since it was in Gujarati, he’s helpfully provided a translation in English, reproduced herein below. Here is the link to the original Gujarati text, should you want to read that instead.

The English translation is provided below –

An 8 Year old cute boy was admitted at St. John Hospital in Bangalore. He was suffering from a severe illness. Doctor told his parents to be patient as he may take 4 months to recover. His parents were ready to go through all the required treatment to make him recover faster. At the same time, a teenage boy came to know about the 8 year old and tried to meet him. And he thought, that the disease could be treated psychologically. He decided to make this little boy happy. As the admitted boy was very young, he thought to be a “Clown” and make some comic actions to make the boy laugh.

Finally on a Saturday he went to meet the 8 year old by dressing up like a clown. When he reached the hospital, the boy was sleeping on the bed with his mom. When he woke up, the “Clown” started singing funny rhymes and tried to make the kid laugh. But he didn’t succeed in this task. He didn’t lose hope though. Next Saturday again, he went to the hospital in the same clown dress. At that time, the boy recognized him and gave him a little smile. This time he carried some gifts as well.

This became a routine for 4 weeks and almost after 2 months, when the “Clown” went to the hospital to meet the boy, he was not in the bed. He had been happy and disappointed too, because he couldn’t met the boy for the last time. But suddenly, a boy came from behind, and held his hand. When he turned around to see, he saw that same little boy. He was healthy now. He asked gifts from the “Clown” because he would always carry some gifts, whenever he came to meet. The boy recovered in just two months!

This is a real incident.  The teenage boy, who became a “Clown” is Harish Bhuvan. His Native place is Baroda, but he is living in Bangalore. He studied B.A in Psychology. After completion of his graduation, he started a job in Banglore. During that period, he had a girlfriend. Both were enjoying their life, and had planned on marrying. Their parents were also in favor of their marriage. But suddenly his girlfriend came to learn that she had blood cancer. She told Harish that her cancer was at the last stage and she may survive only six months. So Harish left his job and decided to spend all his time with his girlfriend, and try to make her happy and fulfill all her wishes. But at last she died due to cancer. Harish couldn’t control himself and went into depression. During this period, his parents tried their best to convince him, but they failed at it. At the time, he was working with the prestigious IIT-Bombay.

Once he visited St. John Hospital, Bangalore along with his friend, he came to know about the boy, who we have described above.

By succeeding in spreading smiles on the faces of a little kid, he came out of his depression and applied himself to this noble cause. He wished to spread smiles on the faces of the ailing. As a psychology student, he knew very well, that happiness can reduce the pain. He took the permission of Hospital authority to come every weekend to spread a smile. He also encouraged college students to join this noble cause, and he got a very well response. Just in Bangalore, more than 200 teenage boys and girls are spreading smiles over the faces of kids by dressing up like “Clowns”. Harish left his job and planned to start an NGO named “Compassionate Clowns”. He gets huge support, both monetary and otherwise, for his NGO’s noble work.

His NGO now has branches in Jaipur, Mumbai and Ahmedabad. And he plans to spread the NGO in other cities in the near future. Anyone who wants to be a clown to spread a smile, is welcome to join.

He generally dresses in “Kurta-Pajamas” and wears a turban on his head. His turban (Paghdi) is made of Dupattas of girls (he admits and even challenges, that he has a huge collection of Dupattas, far more than any girl in the audience)!

Join us at #WATWB, by clicking here to enter your link!

2. Link to a human news story on your blog, one that shows love, humanity, and brotherhood. Paste in an excerpt and tell us why it touched you. The Link is important, because it actually makes us look through news to find the positive ones to post.

3. No story is too big or small, as long as it Goes Beyond religion and politics, into the core of humanity.

4. Place the WE ARE THE WORLD badge or banner on your Post and your Sidebar. Some of you have already done so, this is just a gentle reminder for the others.

5. Help us spread the word on social media. Feel free to tweet, share using the #WATWB hastag to help us trend!

Please read the stories of other participants to spread the goodwill!

52 thoughts on “We Are The World Blogfest Month 6: Compassionate Clowning”